The University Archaeological Society (U.A.S.) was formed on April 18, 1949, as an official adjunct to the Brigham Young University (BYU) Department of Archaeology.  In 1967 the society was renamed the Society for Early Historical Archaeology (S.E.H.A.).  The mission of the society under both names was:

To help the Department of Archaeology [later the Department of Anthropology] by doing some things which a regular academic department might have difficulty dealing with directly: promoting research on scriptural archaeology and giving publicity on a non-technical level to discoveries in this field.

This mission was accomplished through several means:

Unfortunately, several complicated circumstances combined to ensure the slow but steady decline of S.E.H.A. as a viable organization.  Despite this decline, S.E.H.A. managed to continue for another 11 or so years, and produced an additional 20 newsletters (for a total of 164), with the last being dated June, 1988.  The Annual Symposium was continued through at least the thirty-ninth (1990).  While there was talk of merging the S.E.H.A with the Ancient America Foundation (AAF), and at least one AAF board meeting was held with some S.E.H.A. board members, the S.E.H.A. board never voted for the proposed merger.

Over its lifetime, the S.E.H.A. made available a great deal of information of interest to members of the Church of Jesus Christ of Latter-day Saints, including evidence consistent with the Book of Mormon actually being historical and not merely a fable concocted by Joseph Smith.  Much of this information has been greatly expanded on by research conducted and published by the Foundation for Ancient Research and Mormon Studies (FARMS). Indeed, some of those formerly associated with the S.E.H.A. have become associated with FARMS.  For instance, John A. Tvedtnes, a former S.E.H.A. board member and contributor to the Newsletter, is the former Senior Resident Scholar (now retired) at FARMS. 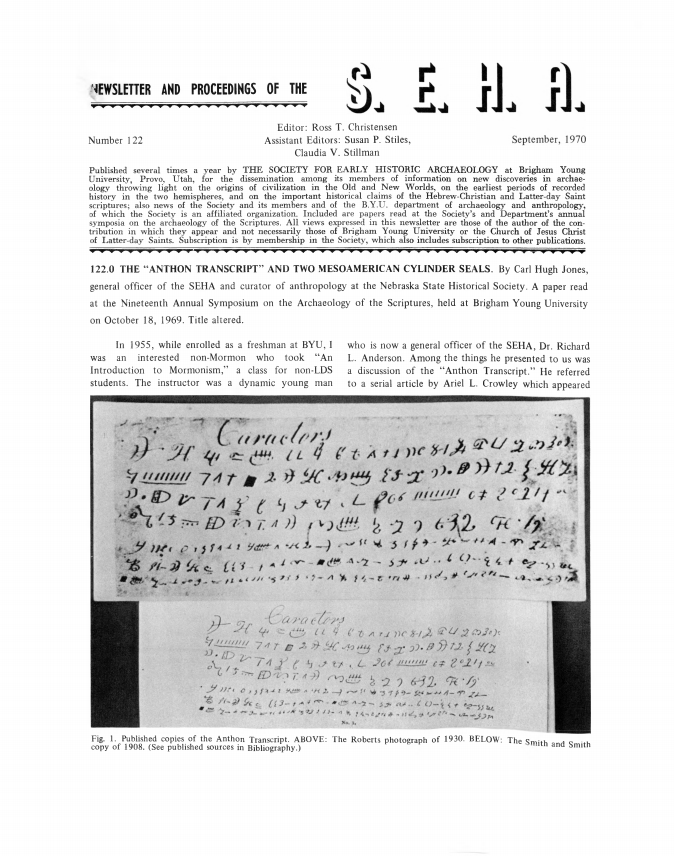