Nahum was a prophet of Judah. Not much is known about him or when he wrote the book of Nahum. We do know, however, that in this book he prophesied the destruction of Nineveh (the capital of Assyria), which happened in 612 BC according to historians. In Nahum 3:8 we will see that Nahum compared Nineveh’s destruction with the destruction of a place called No, which was destroyed in 663 BC. No, or No-amon, was a town in Egypt now known as Thebes. In this book we see Nahum looking both backward and forward in time. Therefore, we know that Nahum’s ministry was probably sometime between those two dates.

Nahum was an Elkoshite, meaning that he lived in Elkosh. It is unknown where Elkosh was located. Some scholars believe that Nahum lived in the Galilean city of Capernaum since its name in Hebrew means “the village of Nahum,” suggesting that the name Elkosh was perhaps changed to Capernaum in honor of Nahum. Nahum, after all, preached against the Assyrians, not against the people of Judah.

In the Old Testament we sometimes see prophets dealing with a “burden” (for example, see Habakkuk 1:1). “Burden” is translated from the Hebrew word massa. In some translations of the Bible, this word is rendered as “a prophetic vision.” In a vision, Nahum saw that God would destroy Nineveh.

Nineveh was located on the east bank of the Tigris River. It was so completely destroyed by the Babylonians and their allies that archaeologists did not discover the remains of the city until 1850.

Concerning the adversaries of God and the wicked, Nahum stated that “God is jealous.” However, God is not jealous in a possessive or selfish way, but more in a bitter or unhappy way. When God is bitter against His adversaries for their wrongdoings, He often becomes revengeful toward them. He shows His vengeance through His power. He has control of the elements and the earth and “all that dwell therein.” However, Nahum also recognized that God is patient and slow to anger. With those traits of vengeance and patience combined, God will not let the wicked get away without justice, and He will patiently deliver justice in His own way. “The Lord hath his way in the whirlwind” (verse 3).

Note that Bashan, Carmel, and Lebanon are located in areas around present-day Damascus (Syria) and the Golan Heights. They are mentioned in verse 4 in conjunction with the fall of Nineveh.

Nahum had faith in God. God knows His children. He notices who trusts in Him, and those who do will be favored. When trouble comes to the righteous, God will buoy them up. He will defend and protect them.

As mentioned in the comments to Nahum 1:1, archaeologists did not discover the ruins of Nineveh until 1850; it had been totally buried. Archaeologists have also learned that Nineveh was overrun by the Khosr River, which was a tributary of the Tigris River and ran through the center of Nineveh.

In this chapter, the prophet Nahum prophesied about the future complete destruction of Nineveh. Nineveh had oppressed many people; now Nineveh would receive its reward—it would be obliterated. The people of Judah could rejoice over that prophecy.

They could also rejoice concerning another future event: Christ’s Second Coming. Nahum referenced a scripture in the book of Isaiah (Isaiah 52:7) that foresaw peace and the Second Coming: “How beautiful upon the mountains are the feet of him that bringeth good tidings, that publisheth peace; that bringeth good tidings of good, that publisheth salvation.” Nahum encouraged Judah to continue performing their vows and holy feasts. The enemy (the wicked) “shall no more pass through thee” to interrupt those events; peace would reign (Nahum 1:15).

In chapter 2, Nahum described how the destruction of Nineveh would come about (it will not happen until 612 BC). Because of their wickedness, Nineveh would receive the same fate as the ancient Israelites who were “emptied . . . out, and marred” (plundered and destroyed) because of their own evil doings (verse 2). Nineveh would be destroyed, while both Jacob (Judah) and Israel (the ten tribes to the north) would be restored to their former glory.

The Babylonian invaders were described here. They would wear red shields and scarlet attire. Their chariots would be swift, and there would be so many that they would “justle one against another” (verse 4).

Nahum stated that the inhabitants of the walled city of Nineveh would hasten to prepare a defense against the Babylonian siege, stumbling as they did so.

Archaeologists have recently uncovered the ruins of Nineveh (near present-day Mosul, Iraq). It is written that “the ruins of Nineveh are surrounded by the remains of a massive stone and mudbrick wall. . . . About 12 km in length, the wall system consisted of a [square cut] stone retaining wall about 6 meters (20 ft) high surmounted by a mudbrick wall about 10 meters (33 ft) high and 15 meters (49 ft) thick.”[1]

Despite such strong defense, Nineveh was destined to be destroyed. Nothing could stop God’s vengeance.

Gates (probably sluice gates, which control water flow) would be opened to flood the palace grounds as a part of the siege of Nineveh.

Archaeologists have discovered many palaces in or near the ruins of Nineveh. Several of them believe that the palace referenced in verse 6 is possibly the palace of King Sennacherib, the king of Assyria (from 705 to 681 BC) who participated in the siege of Babylon in 689 BC. Nineveh became his capital.

Nahum mentioned the capture of Huzzab. The Hebrew word from which Huzzab was translated is here rendered as a proper noun. Some scholars assume Huzzab was the queen of Assyria. However, the noun can also be treated as a personification of Ninevah. Notice the contrast between verse 7 and verse 8, where the name Nineveh is used. Other translations render the original Hebrew word as “it is decreed.” Whatever the rendering, Nineveh, in all its glory, would be captured.

In these verses, Nahum described the pillaging of Nineveh. The city ended up empty and wasted. It was totally pillaged of its “spoil of silver . . . [and] gold . . . [and] pleasant furniture” (verse 9). Under the influence of terror (gloom, or even fire), “the faces of them all gather[ed] blackness” (verse 10).

Nahum used the analogy of a lion’s pack in the sacking of Nineveh. Babylon, the “old lion,” would rip apart Nineveh and collect and store away enough food to feed its own populace (for his “whelps”—its children; for his “lionesses”—its women). Nineveh and everything that was in it would be destroyed. Nahum’s narrative can be seen as a type of what will occur in the latter days.

In Nahum 3:1 the prophet Nahum essentially stated why Nineveh (“the bloody city”) deserved to be destroyed: “It is all full of lies and robbery.”

Nineveh’s attackers would be fierce, as described in verses 2 and 3. They would use swords and spears, and many would be slain. Nineveh’s evil doings would contribute to the reason it needed to be destroyed. Nineveh would be set up as an example (a “gazingstock”) to other nations, well into the future. The Lord is against nations murdering, conquering, and doing other evil deeds to get gain.

Nahum reiterated that because of Nineveh’s evil doings, it would be laid to waste. In verse 8 Nineveh is compared to the city of No-amon (better known as Thebes, in ancient Egypt), which was destroyed in 663 BC. The city was powerful and was allied with the nations of Put and Lubim (considered by scholars to be modern-day Libya), but because of its wickedness, it was nevertheless destroyed. Nahum believed that Nineveh deserved the same outcome.

Because of Nineveh’s wickedness, the enemy’s sword (its military) would destroy the city. Even the king’s nobles, the “crowned” of Nineveh, would fall or be scattered. There would be no later restoration of the city (“there is no healing of thy bruise” [verse 19]). Those that would hear the report (the “bruit”) of Nineveh’s destruction would clap (exult) because they were the people that suffered at the hands of Nineveh.

Nahum’s message in these three chapters is considered to be a message of doom (it was Nahum’s “burden”—see Nahum 1:1). One can look at it that way, but more importantly, it is a message of admonition and a warning call for all peoples and nations: walk in righteousness and follow God’s path that is set out for all. If we stray too far from God’s commandments, His justice will prevail. God is slow to anger, but He will use vengeance when necessary. 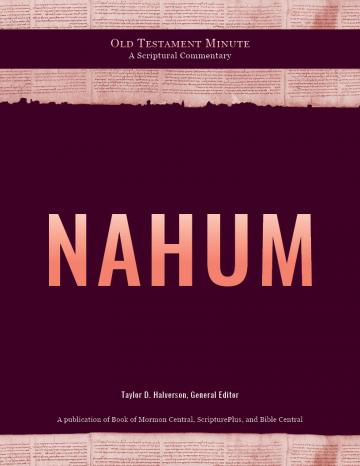