Jonah was sent to Nineveh, the capital of the Assyrian Empire. Nineveh would be destroyed by 612 BC by Babylon, and the Assyrian domain would end in 609 BC. These known dates and the appearance of the name Jonah in 2 Kings 14:25 offer an early date for the setting of the book—the early eighth century.[1] However, there is more under the surface. There is no direct connection between the Jonah of 2 Kings and the Jonah of the book by the same name. Jonah in Hebrew means “dove,” which was a symbol for a messenger (Genesis 9:8–12), an ironic name for the protagonist. The author does not claim to be Jonah and does not know the name of the king of Nineveh (Jonah 3:6; this is analogous to the way the redactors of Exodus did not know the name of the pharaoh). The text itself is dependent on later sources such as Ezekiel 27, the Elijah cycle, Jeremiah, and Joel.[2] Finally, as in a parable, the animals in the story fast and are “covered with sackcloth, and cry mightily unto God” (Jonah 3:7–8).

To have the word of the Lord come to a disciple is perhaps equivalent in today’s language to saying that someone has felt an impression from the Spirit. Jonah heard the word, which came as a specific instruction: to preach to Nineveh. Nineveh was the capital of one of the most aggressive and warring empires of the ancient Near East: Assyria. Anciently, the more a people participated in wickedness, the higher this sin would somehow rise until it reached God, similar to the phrase “I’ve had it up to here with your [insert behavior].” Nothing is physically rising. The message is clear—we often make mistakes, but through daily repentance and with help from an ecclesiastical authority, we can take care of the minor matters. Nineveh’s sin, on the other hand, was staring the Lord in the face.[3]

This command to preach in Nineveh must have come as a shock because Jonah attempted to flee to the end of the world. Tarshish is believed to represent Spain and was the last area before the endless Atlantic Ocean. Jonah had a plan and money to spare. However, hiding from the Lord is an impossible task (Genesis 3:9).

Jonah left on a boat, but the Lord sent storms when he was out at sea. The mariners panicked, and belongings were tossed overboard while they all cried out to their respective gods. Everyone was on deck except for Jonah, who was sleeping, oblivious to the furious winds above. He was indeed asleep during the storm and asleep to his duty to God. Nephi’s words to his brother seem appropriate here: “Ye were past feeling, that ye could not feel his words” (1 Nephi 17:45). It is therefore ironic when he answered the mariners, saying, “I fear the Lord, the God of heaven.”

Although Jonah volunteered to be thrown overboard, he never appeared to help throw any of “the wares” (Jonah 1:5) off the ship or to row hard with the others. In fact, he was too lazy to jump overboard and wanted others to pick him up and carry him. Above all, he never cried unto the Lord. The gentile believers of false gods called on the Lord before Jonah ever did. Those pagan mariners proved that they feared God, even making vows and offering sacrifices to Him. They were more obedient than Jonah.

It is important to note that both the Hebrew and the English translation say that this was a big fish, not a whale.

Jonah did not cry unto the Lord until he found himself swallowed by a fish and stuck there for three days and nights. In this moment of despair, Jonah turned to the Lord’s “holy temple” (Jonah 2:4, 7), finally acknowledging his sin and corruption (verse 6). When Solomon dedicated the temple, he pleaded with the Lord to hear the Israelites prayers if they found themselves far from the land and “if they pray toward this place, and confess thy name, and turn from their sin” (1 Kings 8:35–36). Jonah, at this moment, was far from the promised land. He turned to face the temple to pray for the Lord’s mercy.

Ironically, the Lord did not answer Jonah but spoke to the fish.

Being merciful to His servant, the Lord gave Jonah a second chance. This time, like Moses, Jonah was obedient “according to the word of the Lord” (Numbers 3:16). Certain imagery repeats itself from the previous story. The fish was “big,” and the city was “great,” which are the same word in Hebrew. Jonah was inside the fish three days, and it would take him three days to walk around Nineveh.

In verse 3, the reader is not told what words Jonah was supposed to impart. In verse 4, Jonah did not preach repentance but destruction. Jonah lacked commitment to the cause. He was only willing to walk for one day even though it took three to walk around the city.

With Jonah’s message of destruction, the people, led by their king, repented.[5] Whereas Jonah fled after hearing the word of the Lord the first time, the wicked people of Nineveh repented upon receiving the message the first time. In fact, the animals who fasted and put on sackcloth were more obedient than Jonah (fasting and sackcloth show repentance; verses 7–8).

Another repeated motif is the Lord’s mercy on the people. On the ship, the mariners cried unto the Lord, and He saved them from death at sea. In Nineveh, the people turned from their evil ways, and the Lord spared them.

For the second time, Jonah cried unto the Lord. The first time it was from the belly of a fish. This time, he was upset with the Lord’s mercy. The people had repented, and the Lord had suspended His judgments. Jonah’s anger seems odd—had not the fish been an act of mercy? Yet, Jonah had always been fully aware of the Lord’s mercy, almost repeating Moses’s words in his prayer: “And the Lord passed by before him, and proclaimed, The Lord, The Lord God, merciful and gracious, longsuffering, and abundant in goodness and truth, keeping mercy for thousands, forgiving iniquity and transgression and sin” (Exodus 34:6–7). But the Lord’s mercy toward Nineveh was too much for Jonah and he said he would rather die. How ironically childish!

Although the Lord directly asked Jonah if he had any right to be angry, Jonah turned his back and left. Clearly, Jonah did not have a strong relationship with the Lord. He received inspiration but disagreed and went his own way. In fact, the only physical labor that Jonah ever did was to make himself “a booth” for his own exclusive benefit, though it does not seem to have provided very good shade (Jonah 4:5). God had to help him by preparing a plant to provide more shade, specifically over his head. When the plant withered, the text states that “the sun beat upon the head of Jonah” again, showing that the booth was not effective from the start (verse 8). Not only was Jonah disobedient but he was also incapable of providing for his own needs.

In his despair, Jonah wished to die (verse 9). When Elijah cried, “O Lord, take away my life,” he was being chased by a wicked king and false prophets (1 Kings 19:4). Jonah, on the other hand, was not being persecuted or chased by anyone. He simply did not build a shelter capable of giving him shade.

Ultimately, the Lord demonstrated to Jonah his inconsistent behavior. Jonah was mourning more for the plant that had withered than rejoicing for the people of Nineveh who would be spared. The Lord blesses whom He wants. He told Abraham, “I will bless them that bless thee” (Genesis 12:3). The Ninevites had blessed Jonah by receiving his message. Israel was God’s people, but so were the Ninevites. To declare the equality of all people, the Lord told Amos, “Are ye not as children of the Ethiopians unto me, O children of Israel? saith the Lord. Have not I brought up Israel out of the land of Egypt? and the Philistines from Caphtor, and the Syrians from Kir?” (Amos 9:7). All God’s children can be blessed and led by Him.

[1] A book’s setting and its date of composition are not always the same.

[3] The Hebrew word translated as “before me” literally means “to the face of.”

[4] Sheol is the participle of the verb shaal, which means “to ask, to inquire.” Sheol was the place of inquiry, the questioning place, the “what is it?” place. King Saul (Shaul) was the “clueless one.”

[5] There is no other historical record of this ever happening. The message is to not judge other nations and to let God prevail in His omniscient plans. 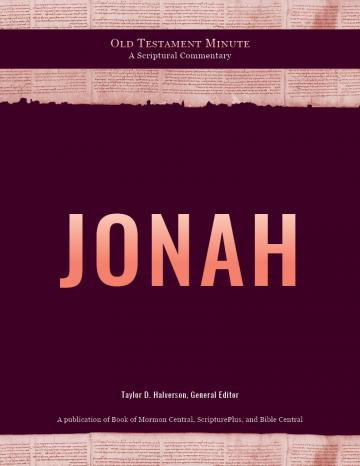