Joel was a prophet of ancient Israel and the author of the book of Joel. Pethuel was his father. We know nothing of Pethuel as this is the only place in the Old Testament where he is mentioned.

We also do not know the time frame of Joel’s ministry because nothing in his writings indicates the rulers of his era. However, some linguists date Joel’s writings to around 500 BC. They suggest that the Hebrew dialect preserved in the book of Joel is consistent with that of other writings during that time. But ultimately, the best we can say is that we don’t know when the book was written.

Joel had a message addressed particularly to the “old men [elders]” but generally to “all inhabitants of the land.” His message focused on future events, especially on the last days preceding the Second Coming—the “day of the Lord” (to which we will see several references, starting in verse 15). His message was so important that Joel encouraged his readers to “tell ye your children of it, and let your children tell their children.”

Locusts are insects that typically move in large numbers. They are frequently mentioned in the Old Testament as causing destruction to entire crops. Using the metaphor of four stages of locusts destroying the land, Joel prophesied of a future invasion by conquering armies. “Drunkards” are those who are insensible to such prophecy.

Locusts symbolize a nation in verse 6. This nation was “strong, and without number, whose teeth were the teeth of a lion.” It would strip the “vine and the fig tree” to waste. Note that the vine and fig tree were often used by Old Testament writers as metaphors for God’s people, the Israelites. The lion was often used as a symbol for Mesopotamian invaders such as the Assyrians or Babylonians, enemies of the Israelites. Since Joel was prophesying concerning the latter days, these metaphors can also have relevance in our present day as we anticipate the Second Coming.

Joel described the angst and turmoil that will accompany the Second Coming. Many people will not find joy during that time. Joel described the people as wearing sackcloth, which is a burlap fabric often worn during mourning or repentance in Old Testament times.

Joel prophesied that the “day of the Lord is at hand.” The people needed to prepare for it. As a part of that preparation, Joel invited the people to convene for a solemn assembly in order to fast, repent of past wrongdoings, and ask God for relief from the devastation that they had experienced or would experience.

Joel again alerted all peoples about the Second Coming of the Lord. Preceding that event will be war, destruction, and a day of darkness. The people of the land will tremble. No such event will have occurred before, and never again will it occur.

As depicted in chapter 1, a “nation” of locusts was a metaphor for an invading army overrunning the land. In this chapter, Joel described in more detail why no one would escape that army. Even in a place that once looked like the Garden of Eden, the land would become a desolate wilderness because of the destruction caused by the invading hordes.

At the time of the Second Coming, in addition to the army causing much destruction, natural upheaval such as earthquakes and total darkness will cleanse the land and bring judgment on the people. However, despite the turmoil, there will still be hope. God, who is gracious, merciful, slow to anger, and kind (as described in verse 13), will give people the opportunity to repent, to put off evil, and to change their lives. God will bring judgment upon the wicked but will give peace and blessings to the righteous.

Again, Joel called for a gathering of all the people for a solemn assembly, which was to include fasting and prayer that people be spared. The people needed to be aware of God in their lives and to not feel the need to say, “Where is [my] God?”

Up to this point, Joel was prophesying about the destruction of the land because of an invading army and natural causes. Beginning in verse 18 and continuing into the verses that follow, Joel was expounding on the Lord’s promise to restore that which was destroyed. The Lord would pity His people and turn away from reprimanding them. In addition to restoring empty grain fields, vineyards, and oil, the Lord would also cause the enemy’s army to withdraw from the land.

Joel prophesied that the Lord would do great things in restoring the land. The fields, the orchards, and the vineyards, all of which were destroyed by the army of locusts, would be restored. In order for the crops to grow and for the people to be suitably nourished, the Lord would cause the autumn and spring rains to return. There would be enough food to satisfy all. The people would know that God was in their lives, and they would praise Him.

At the Second Coming, the people of Israel will know that God is real and active in their lives. They will feel God’s Spirit. Heavenly and earthly wonders would be evident. Preceding the “great and the terrible day of the Lord” (the Second Coming) will be complete darkness. However, people will not need to fear. Whosoever will call upon the Lord will be delivered. That deliverance would be witnessed “in mount Zion [the New Jerusalem] and in [Old] Jerusalem.”

The term deliverance in the Old Testament is often associated with the Atonement of the Savior and the effects of His Atonement in our lives.

Joel 2:28 begins, “And it shall come to pass afterward.” Joel 3:1 starts out, “For, behold, in those days, and in that time.” These references to a future time are connected in Joel’s prophecy. In that time, the Lord will not only bring back the captives of Judah and Jerusalem but also “gather all nations.” His people, who had been divided, sold, and scattered among all nations, will be gathered into the “valley of Jehoshaphat.” There the Lord will plead for (judge) those nations that mistreated His people.

In Israel, there is no valley or place called Jehoshaphat. The name means “Jehovah judges,” and the “valley of Jehoshaphat” probably symbolizes God’s place of judgment.

The Lord dared the ancient nations of Tyre and Sidon (modern-day Lebanon), as well as Palestine, to threaten or confront Him or His people. If they chose to do so, God would judge accordingly and retaliate, or “recompence upon [their] own head.” He would do to them as they would have done to His people of Judah: if they sold the children of Judah to faraway places (“unto the Grecians”), then God would bring the children back home; the Judahites would in turn sell the enemy’s children to people in faraway places (“to the Sabeans”).

There is controversy among scholars as to who the Sabeans were. References to Sabeans have been found in current Islamic texts, so some believe that the Sabeans had Arabic origins. In addition, they were often referenced in ancient writings as a people distinct from Jews and, later, Christians. Whoever the Sabeans were, Joel probably used them to represent a faraway place.

The Lord dared the heathen nations to proclaim war against His people. Despite their strength, wicked people who fight against Him will feel the wrath of God, who will gather them and judge them in “the valley of Jehoshaphat” (see also Joel 3:2).

The word “[wine]press,” used in verse 13, is also used in other scripture to refer to God’s wrath while exacting judgment upon nations who fight against Him. “Fats,” also in verse 13, can be rendered as “vats.” See also Joel 2:24 and Revelation 14:14–20.

The phrase “valley of Jehoshaphat” symbolizes the place where the Lord will make judgment. In verse 14, that place is referred to as the “valley of decision.” Eternal fate will be decided at that location as the battle rages. Who will be with God, and who will be against Him? Many biblical scholars identify this as the Battle of Armageddon.

At the Second Coming there will be darkness, and the earth will shake, “but the Lord will be the hope of his people, and the strength of the children of Israel.” People will recognize God’s hand in these events. Foreign nations (“strangers”) will not tread through Judah and Jerusalem anymore.

“And it shall come to pass in that day” that the Lord will bless Judah with plenty. There will be no more drought in Judah. There will be water in such abundance that even the Valley of Shittim [Acacias] will be wet. (The Valley of Shittim is an extremely dry valley located near the Dead Sea). The plague of locusts (the armies) against Judah that was prophesied in chapters 1 and 2 will be no more. However, desolation will continue in the enemy nations, among them Egypt and Edom, because of the violence that they brought against Judah. God will prevail; Judah and Jerusalem will be restored and live on from generation to generation. God will dwell forever among His people. After enduring trial after trial, God’s people will finally realize hope!

The book of Joel is a message that tells us that after trials—even severe trials—there is always hope. To allow that to happen, Joel reminded us that we need to stay on God’s side, endure in patience, and have faith. God will fight for those who are righteous and who belong to the kingdom of Zion. 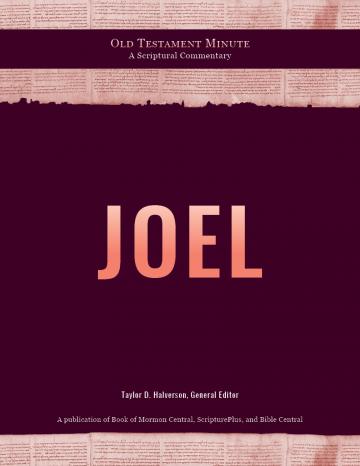