The magnificent temple of Solomon was destroyed, along with Jerusalem, in 587 BC by the Babylonians (under King Nebuchadnezzar). Many Jews were then taken captive to Babylon. In 539 BC, King Cyrus the Great of Persia captured Babylon and subsequently allowed the exiled Jews to return to Jerusalem to rebuild the temple there (see Ezra 1:2).

King Darius (Hystatpes) of Persia reigned from 522 to 486 BC. He supported the rebuilding of the temple in Jerusalem. Zerubbabel had presided over the return of exiles from Babylon. At this point in the record (in the second year of King Darius’s reign), he was governor of Judah; Joshua was the high priest (supreme ecclesiastical authority) in Jerusalem. Haggai was a prophet during King Darius’s reign and is one of the twelve minor prophets in the Old Testament (minor because of the shortness of his book compared to other Old Testament books of longer lengths).

The temple of Solomon sat useless for many years after its destruction. Rebuilding of the temple began in 536 BC, but because of delays, the work stopped after two years and was neglected for fourteen years thereafter. In 520 BC (the second year of King Darius’s reign), Haggai, by the word of the Lord, told Zerubbabel, Joshua, and the people that it was time to resume construction on the temple. Since returning from exile, the people had been focusing on their own nice houses and had neglected the Lord’s house. In these verses, Haggai urged the people to consider their priorities and to now continue rebuilding the house of the Lord, which at one time had been a glorious temple (see Haggai 2:3). Haggai’s urging eventually paid off—the temple rebuild was completed in 516 BC during the sixth year of Darius’s reign (see Ezra 6:15).

With Haggai as messenger, the Lord impressed upon the people the elusiveness of material things, encouraging them to think about their worldly ways. Because of their materialism and their allowing the temple to remain in ruin (“wasted”), the Lord had caused a drought in the land. Interestingly, in the original Hebrew version of theses verses, the words for “waste” and “drought” are similar: the Hebrew root for both words is hrb. That is probably not a coincidence. Haggai appears to have been inseparably associating the welfare of Judah to rebuilding the temple. Because there was a deficiency in the effort by the people to rebuild the temple, the Lord had caused a deficiency, or drought, in the land. If the people would but move ahead with the temple rebuild, the Lord would “take pleasure in it” (verse 8).

Recognizing the drought and the ill effect it had on their welfare, the people now “did fear before the Lord” (verse 12). Thus, the people and Zerubbabel and Joshua were “stirred” by the spirit of the Lord and the message that Haggai delivered— and they obeyed. They took action and began again to rebuild the “house of the Lord of hosts, their God” (verse 14).

Note that the title “Lord of hosts” is used six times in chapter 1. Note also that it is used another nine times in the next chapter. This name is often rendered “Lord of the Angel Armies,” referring to God’s angelic armies in heaven.

Another note of interest concerns Zerubbabel, who is listed in the ancestral genealogy of Jesus. Zerubbabel was the grandson of a former king of Judah and was appointed governor of the first group of exiles returning from Babylon about nineteen years before the book of Haggai was written (see Ezra 2:2). Joshua (often seen as “Jeshua” in the scriptures) was also a part of that group. Both Zerubbabel and Joshua led the effort to rebuild the ruined temple. Scholars often refer to the rebuilt temple as the second temple or even as Zerubbabel’s temple.

According to verse 3, Haggai seems to have personally remembered the glorious temple that Solomon built, which was destroyed in 586 BC. At this point, in 520 BC, it is only partially rebuilt (see the commentary to Haggai 1:1–5). Rubble probably still remained. Apparently, the people were making comparisons and thinking that because of the drought and other reasons, they could not afford to build such a magnificent structure as Solomon had built. So the Lord, through Haggai, urged Zerubbabel, Joshua, and the rest of the people to be strong and to throw off their fears and get to work. Afterall, God told them, “My spirit remaineth among you,” just as it had during the Exodus out of Egypt years prior (2:5). God would empower the people to accomplish the task of rebuilding Solomon’s temple.

In verse 6, the Lord is referring to His coming day of judgment at the Millennium. This portion of the book of Haggai is quoted in the New Testament: “Whose voice then shook the earth: but now he hath promised, saying, Yet once more I shake not the earth only, but also heaven” (Hebrews 12:26). Christ, the “desire of all nations,” shall come to the temple and fill it with glory (verse 7).

For those in Haggai’s day, the Lord would provide the means (with silver and gold) to allow the temple to be rebuilt. The result would be a temple more splendid than the former temple of Solomon. Peace will preside there.

One may wonder how this rebuilt temple could have been more glorious than the former when materials were perhaps in short supply in Haggai’s time. Herod the Great began remodeling the rebuilt temple in 20 BC. It was finished in AD 65, and scholars describe it as more glorious than Solomon’s temple. In addition to that, the Lord of Glory Himself personally visited that temple during His mortal ministry. Several references can be found in the New Testament to Jesus’s being in the temple. For example, Mathew 21:12 tells us that “Jesus went into the temple of God, and cast out all them that sold and bought in the temple.” Mark 14:49 states that “I [Christ] was daily with you in the temple teaching.”

With a revelation that a magnificent and beautiful temple would be built, Haggai reminded the people working on the temple that they needed to be clean. He used the Mosaic law to explain uncleanliness to the Jewish priests. Just working on (or even just touching) a holy site would not cleanse the people or the nation; they themselves needed to work on becoming clean. The temple should not be defiled, so if they were to enter the temple (or to even work on it), they needed to be clean.

Despite the chastening that the people of Israel had received in the past because of their sinful ways, they did not listen, and they did not learn. Since the people were now starting to put their priorities in order by working to rebuild the temple in Jerusalem, the Lord “from this day” would pour out blessings upon them (verse 19). Those blessings perhaps would not come immediately (“the seed [is not] yet in the barn” [verse 19]). The people would have to prove themselves. However, it was as if a new era were beginning, when the people could start fresh and put off their old ways.

In verses 10–19, the Lord spoke in terms of the past and present. In verses 20–23, He requested that Haggai speak with Zerubbabel (the Lord’s servant) and share with him a vision of the future and of God’s power. At a future time (“in that day” [verse 23]), there would be tumult and overthrow of kingdoms. The phrase “in that day” is very common within the scriptures in prophetic contexts, and it often refers to the time of the coming Messiah. Haggai’s vision places Zerubbabel in that messianic context. It was shared with Zerubbabel because he was of the royal line of David and was to be a type of the coming Messiah, who is the ultimate King of the royal line of David. As Zerubbabel presided over the return of exiles from Babylon, Christ will preside over the gathering of the House of Israel as a prelude to His future coming (see 3 Nephi 21:1). Making Zerubbabel His signet ring was the Lord’s guarantee that His promises will be fulfilled in blessing all peoples through the house of David. 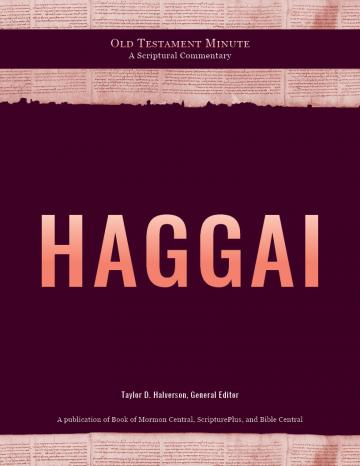